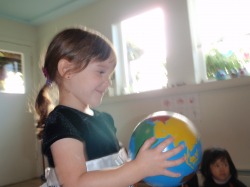 Earth history, political geography and culture are grouped together with life sciences adjoining. Language, mathematics and geometry are each given their own areas within the classroom. The outdoor environment, including garden space, is an extension of the Montessori classroom. The larger community is part of the “going out” experience.
Through field trips and community service related to the curriculum, the student views the world as his/her classroom.

Who Was Maria Montessori?

Maria Montessori (1870 - 1952), the first woman doctor in Italy, became interested in education while working with mentally handicapped children in the course of her medical career. She discovered an unsuspected potential in these children after using didactic materials devised by two French doctors, Itard and Seguin. She elaborated these materials and developed new ones. The results she obtained with these children were so astonishing that she had them tested with typical children of the same age. Her children came out ahead and she realized that something was drastically wrong with the education of the typical child.

She gradually abandoned a successful medical practice and appointment as a Professor to the University of Rome and dedicated herself totally to the study of human development. The basis of her studies - as of most scientists - was observation. She was quoted as saying "I do not think, I observe". She observed indeed, for half a century or more - in Europe, America and Asia, children of all races, cultures and social environments. She found that children developed according to the same rules, manifesting the same needs and tendencies at the same time in their lives. From this extensive study of a complex educational philosophy and practice grew what has become known as the Montessori Method.

In 1907, Maria Montessori opened the first Casa dei Bambini in one of the poorest quarters of Rome with unprecedented results. In less than a year, fifty children from illiterate families between the ages of three and six, blossomed to become courteous, self-assured little people who were working independently, with cheerful self-discipline. They had also begun to read and write spontaneously which caught the public eye. These children became known throughout the world as Maria Montessori's "Miracle Children".

Since then, the Montessori philosophy of education has been advocated by Montessori societies in Europe, Asia, North and South America, Australasia and Africa. Montessori schools around the world have educated hundreds of thousands of children in the past ninety-six years.

In 1929 Maria Montessori and her son Mario founded the Association Montessori Intemationale. One of the main functions of the A.M.I. has been to perpetuate Montessori education following Maria Montessori's guidelines, maintaining her philosophy without violating its integrity. To this end the pedagogical principles of A.M.I. are guided in training centres around the world.